I started seeing versions of this McCalls 6559 all over the sewing blogs earlier in the summer.  I might have just passed right over this pattern if I had not seen so many awesome versions!  In fact, I like the pattern so much I've made two for myself! 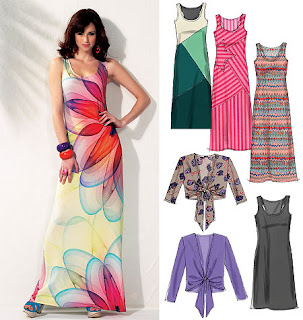 One thing I have learned from this pattern is this: now that I have more experience, I tend to make things harder for myself than they need to be.  I guess it's my desire to be creative and make something a bit more unique, but to be honest it's really annoying sometimes.  Case and point: it is possible to make this dress with only 2 pieces; a front and a back.  ONLY TWO PIECES!  Sew up the shoulders and the sides, hem and your good to go for a cute maxi dress!  But what did I do instead?  I decided "no, I need to do the version with all the crazy stripes and not the 2 piece version that would probably take an hour." 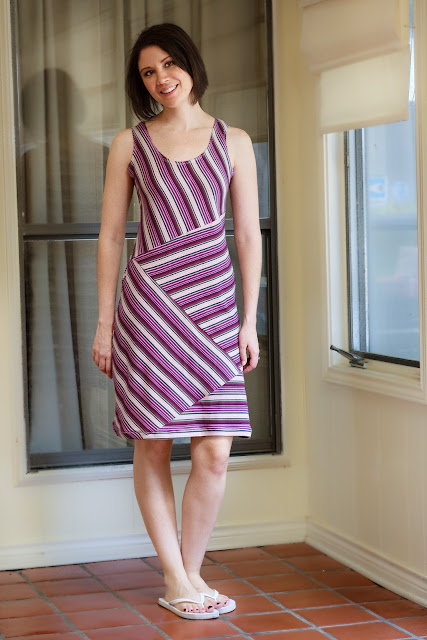 You're probably thinking "but this is not a maxi," and you're right.  It's not.  It was supposed to be...but it's not.  And I've decided I'm ok with that and I do like the dress anyways.  So what went wrong, you ask?  My cutting went wrong.  Very very wrong.  I folded my fabric and then cut the back piece on the fold. Totally normal; nothing weird there.  BUT, the pieces for the front side were very oddly shaped, and I really should have created a fold on a third of the fabric and not folded the entire piece in half because unfortunately it was almost impossible to fit those weird pattern pieces into the sides around where I cut out the back. 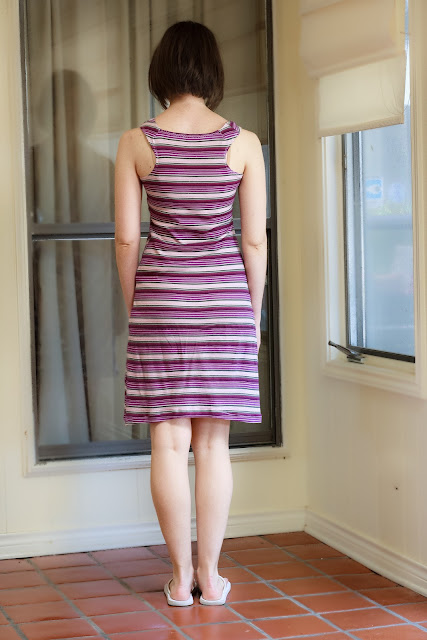 Even with the awkward cutting, I DID get all of the pieces cut out.  So, you ask, why is it still not a maxi?  Well, this is where the rookie mistake comes in.  I am so used to cutting out fabric folded over, so you end up with two of the same piece and it doesn't really matter which one is facing which direction because you have both covered (do you see where I'm going with this?).  So to fit the odd shaped pieces on the fabric, sometimes I had to turn the pattern pieces over.  This is a problem when you're cutting on a single layer (DUH!!!) because some of your pieces will be backwards.  And that is exactly what I had: 2 backwards pieces and 2 correct pieces...and no more fabric...and this was the end of the bolt.  AHHHHHHH!!  And so a maxi became a mini, and live goes on.  I was definitely disappointed though. 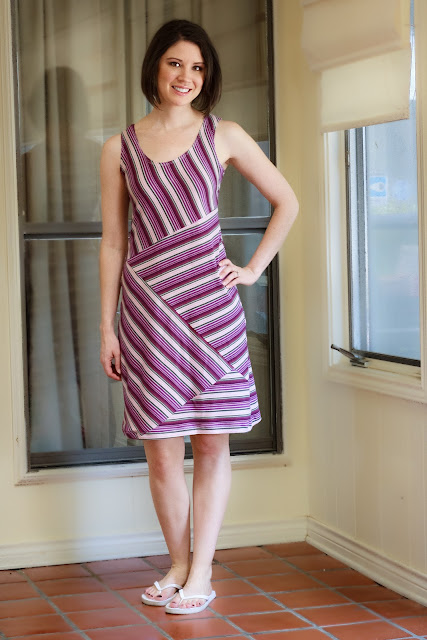 Things I don't like: the pattern has you fold down the neckline and stitch as a way of finishing it.  That's fine, but I feel like it's a bit uneven and it would have been better with a facing of some kind.  Same for the armholes as well.  I'm also having some trouble with this fabric stretching out at the shoulders even though I used some twill tape as a stay (I guess it's pretty heavy). I also learned my lesson about not pre-washing fabric, because even though I don't use any hot and I hang it to dry, there is some buckling in places now from shrinking (it's 100% cotton knit...shoulda known better).

I was still determined to make a maxi dress, so I decided to make another version.  I found 1.5 yards of white lace in the remnant bin at Hancocks and so the idea was born to make a lace maxi dress since lace seems to be everywhere this summer.  Once again, I took a simple pattern and made it more difficult than necessary, but it was still easier than the first version.  I at least used the version with just 2 pieces this time. 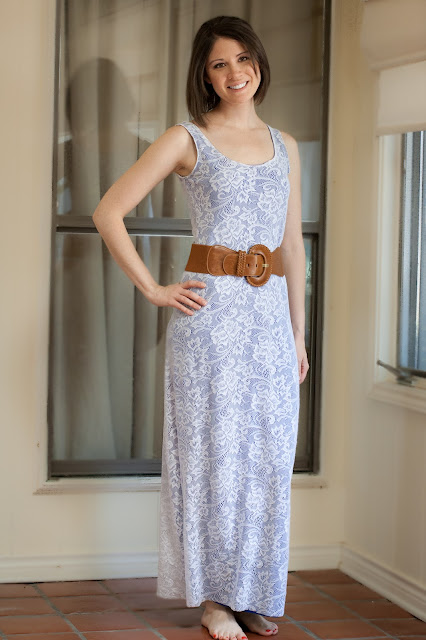 The main issue I had with this dress was that the remnant was not cut straight, so I couldn't get the full length that I was hoping for (that was annoying).  The bottom is actually straight, by the way, I'm just standing weird.  I also decided to make my life easier by cutting out the underlining and the lace at the same time (I just put them together and folded them as one piece and then did my pinning and cutting).  I really don't have much advice about whether that was a good or bad decision.  I probably should have not been so lazy because the pieces didn't match up as well as they could have, but I really hate cutting out pieces. 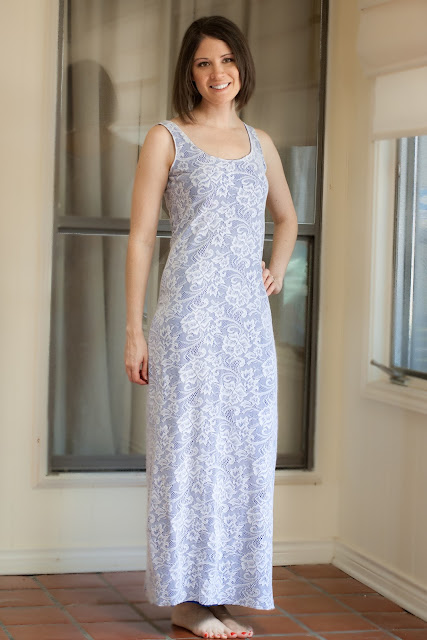 I wasn't entirely happy with the neckline of the first dress, so this time I attached the lining to the front, flipped it to the inside, and under-stitched it down.  I like the polished look much better. I wanted to do that with the armholes too, but I would have had to turn the whole dress right-side out through those tiny little straps...wasn't gonna happen...so I just turned the edges under and stitched them. 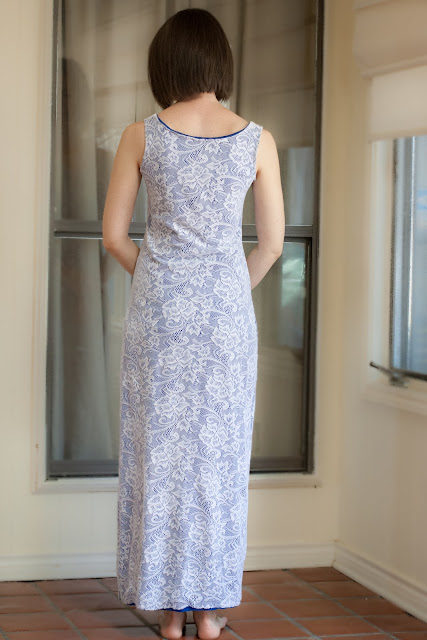 I used the racer-back piece for the first dress, so I used the other one for this dress.  I had the same gaping problem with both dresses but I added a couple of shoulder darts to the first one and I haven't done that to this one yet.  I probably will though and if I make this dress again I'll try to remember to adjust the length of the back neckline as it's too long for me. I didn't hem the bottom of the dress because I didn't want to lose any length and these fabrics don't fray, but I will say that the polyester knit I used has major static cling issues!  That's why you can see a hint of blue peeking out at the bottom but it's usually not there. 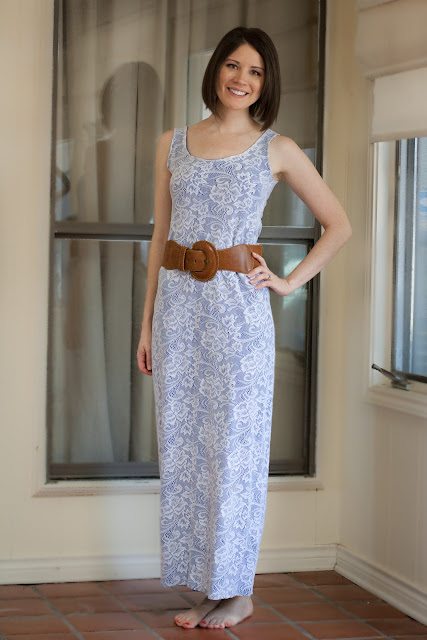 I really like this pattern and I'm sure next summer I'll crank out some more because it's really a simple pattern.  I think next time I'll just buy some knit fabric, cut out the 2 pieces, and not try anything fancy!

Kari
Texas, United States
Loves sewing, knitting, photography, and whatever the next obsessive hobby comes next.